Some Photos from my summer hunt in Normandy August 3 to August 8th.

My first objective for this hunt was to guide my friend/guest from the US, Neil Summers. Neil is a very experienced world traveler and bow-hunter, he is the founder and owner of Bowhunting Safari Consultants.

During the week we saw many bucks chasing does and had some very good stalks. On the 2nd day (in the afternoon hunt) after placing Neil in a hot Fence Line where a mature buck was seen several times, I decided to check-out some other fields in more remote areas. My scouting mission was successful as in the last field I spotted a lone buck laying down in tall grass, I could not judge the trophy as I was behind him and did not have a profile view. The wind was right, so I decided to crawl up closer  and closer, at about 20 meters from the bedded buck (almost too close) I discovered it was a mature six point buck. I managed to crawl back to the fields edge and exited the field to see if Neil would be interested in the stalk. He agreed to come with me and together we walked to the field’s edge and slowly entered the corner of the field. There we saw the buck, he had stood up and was busy feeding. At this point in time it was 7 PM and I was surprised that the buck was not accompanied by at least one doe which would make the stalk much harder. I planned the stalk and made the hard decision to walk in the opening without any cover for about 20 meters (this was the only way to get behind some cover available) and then cut 90 degrees right behind a big bush that would allow us to get within shooting range. Luckily the buck was feeding in the opposite direction. I was relieved when both of us made it behind the bush. From there we approached within 30 meters using the bush as cover. The wind was perfect. I kept looking for any does, just in case. By this time the buck was slowly feeding away and we had to wait until he gave us a broadside shot. This finally happened after about 10-15 minutes. Neil measured the distance to be 37 Yards (his telemeter is set for Yards) which is between 30-35 meters. Neil was confident of the shot as he practices regularly up to 50 yards with his 70lb compound, so we agreed it was the right moment to attempt the shot as the buck had no clue of our presence and was feeding. At the impact the buck shook violently and momentarily dropped to the left, then he got up and slowly ran to our left to the fields edge and stopped, he looked in our direction, and then dropped down no more than 30 meters from us. I think he was dead in less than 30 seconds from the impact. The amazing thing is that Neil’s arrow was a clean pass through in the hind quarter touching the femoral artery. I was delighted and very proud of our accomplishment, it was great teamwork indeed. Neil was very happy with his mature Roe Buck trophy. As soon as the Buck was down, two does entered the field and were obviously looking for the mature buck.

The next morning we spent time taking photos, preparing the meat and taking the trophy to a taxidermist in the region. We continued hunting some mature bucks and had several close calls.

On the Fifth and last day, at 7:00 AM I finally shot my buck (also a mature six pointer). I shot him whilst stalking to a tree stand on a ridge. Before I got to my tree, I saw the buck coming with his nose down, I waited behind a tree, nocked an arrow and got ready, He kept coming, finally he stopped at 7 Meters, looked to his left away from me, I drew and shot just when he turned my way at 7 meters. The arrow entered ¾ facing on the right shoulder taking both lungs, at impact the buck jumped up vertically to a level that seemed very high (easily above 1 meter) and ran in a semi-circle covering less than 30 meters before going down. I was delighted as during the last two days I had several close opportunities at nice buck but could not get a shot off. 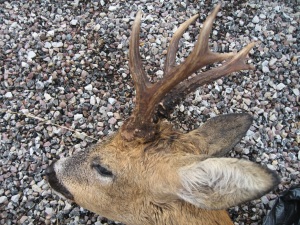 Looking back at this five day hunt, I believe I had more pleasure and sense of accomplishment guiding Neil to his buck and helping him with his success than with my own. I  guess it’s all about sharing special moments.